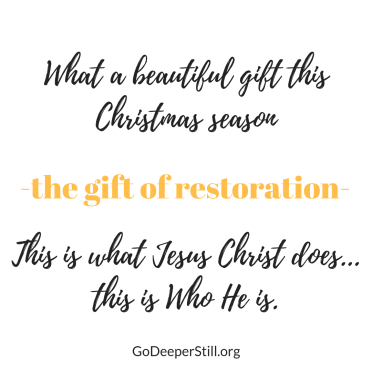 “‘Father, I have sinned against heaven and in your sight, and am no longer worthy to be called your son.’ But the father said to his servants, ‘Bring out the best robe and put it on him and put a ring on his hand and sandals on his feet.'” Luke 15: 21

Most Christians are familiar with the story of the prodigal son in Luke 15. However, most Christians have not experienced this kind of amazing immediate grace demonstrated by the father in this passage.

After my abortion, years passed and much work was needed to be done on my part in the form of Bible studies and renewing my mind to the truth of God’s Word before I could accept the miracle of Luke 15–the miracle of restoration. My restoration was not immediate. Not because God’s grace wasn’t sufficient, but because of my lack of understanding of the miraculous work of the cross of Jesus Christ.

The sin could be abortion or any sin in your life, but what this passage demonstrates is the miraculous immediate restoration offered by the Father. There was no period of penance. There was not a period of time this son was required to feel bad about himself or carry shame for his behavior. The blood of Jesus is available immediately, there isn’t a waiting line or time requirement before accepting the price He paid for us. The difficulty is feelings of unworthiness of the gift stand between us and freedom.

What an incredibly beautiful gift this Christmas season–the gift of restoration to a place of honor. This is what Jesus Christ does…this is Who He is.

Oftentimes as Christians, we feel the need to carry shame and feel bad about ourselves even after we have repented. Somehow we even feel this pleases God. However, allowing shame to hold us captive doesn’t serve any good purpose. This feeling of defeat and feeling less-than is a tactic of the enemy with a voice that whispers, “Who are you? Look what you did. You will never be good enough. You are unworthy.”

Grace must not be cheapened, and this is by no means lessening the sin of abortion. Abortion is a horrific life-taking sin. But when true repentance, sorrow, and grief over this sin occurs, it is our duty and privilege as believers to offer this grace of Luke 15 to others and even to ourselves.

What would our lives look like if we truly lived out Luke 15? For the son in Luke 15, he knew he didn’t deserve to be restored to the place of honor as son. And legally, this father could have refused him or made him repay for all he squandered. But that isn’t the way of the kind and gentle Father. Instead, the father not only forgave and received him, he restored him to a place of honor giving him: a robe of righteousness, a ring symbolizing authority, and sandals representing that he was a son and not a servant since servants did not wear sandals at that time.

This is the heart of the Father. If you have had an abortion or if there is another sin that has kept you in bondage to shame, guilt, and condemnation, there is hope for you today.

Will you receive His miracle of amazing grace today for yourself. He is calling you out of the darkness, to stand up, put on your robe, ring and sandals!

Can you hear Him calling you today?

Stand up ____________.  Here is your robe, ring, and sandals. Wear them my beloved daughter/son. For my daughter/son was dead and is alive again, was lost and is found.

Do you have an abortion wounded heart? 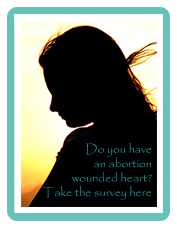 Deeper Still Devotions is a part of Deeper Still Ministries whose focus is to serve the abortion wounded heart. Visit the main site to learn more: